I know you were concerned about me attending a get together with my new ExPat Americans In London group and demonstrating against the Commander in Thiefs visit to London but in the end there was nothing to worry about. Most of the people appeared to be professionals in their mid to late 40's and extremely kind. We met at this pub called The Lord Moon of the Mall very close to Trafalgar Square. What was great was that it wasn't just us Yanks there. I spoke to people from not only the US but also UK and Italy who shared similiar views. Once we left the pub we were a bit lost with whether to join the thousands of other protestors at Parliament Square or hang at the motorcade route so Bush can get a glimpse of our "LIAR LIAR! and "America Says You're Fired" posters. We ended up doing both and it felt pretty good being with so many people and making a statement like that. One gentlemen who is part of our group had 8 large cardboard letters that spelled out LIAR LIAR and I was holding one of the letters at any given time. We had professional photographers and tourists snapping up pics of me and my posse. A UK news agency called Sky News asked if we could stay together for a bit so her camera guy could film us. There were soooo many bobbys out there armed and unarmed. Usually the police don't carry guns around here, so you know it's a real special occasion when the armed ones come out. Anyways, here's a couple pictures from today. One where I'm in front of a humongous wanted poster where GW looks like Alfred E Newman. Just hours have gone by and it's already top news story on the BBC:

I hope you get a kick out of this. Happy Father's Day Pops! 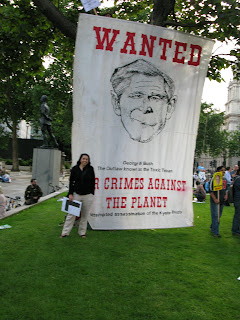 Posted by Spccwgurl at 6:03 PM

Amazing work - inspiring to us all. I know so many of us are sick to death of the travesty, the treachery. Thanks for representing that sentiment on behalf of those of us left behind, as it were.