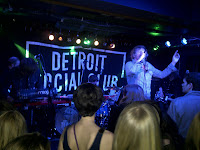 The singer, David Burn managed to do a stage dive during the set that turned that motivated the moshers to go from nuts to insane in seconds. The band played a jolly acoustic sing-a-long with "Black and White". I was a bit disppointed with the less than an hour set and no encore, but I guess you can't ask much for a £7 entry.

Good things to come with these fellas.
Posted by Spccwgurl at 12:35 AM